We’ve had an unusual winter this year. Some days are so unseasonably warm that I forget to take a coat with me when leaving the house, and a couple of days after Christmas my dad and I raked leaves as though it were October. I found myself asking the other day, “where’s our bleak midwinter?” And, I almost can’t believe it myself, but I’m rather missing the snow and bitter cold this year.

Mexico City has a relatively temperate climate. Growing up we knew it was winter because we had to put a sweater on and close the window. We knew it was summer because we could open the window again. And that was about it…no winter snows, no sweltering summer heat. I had no idea how easy I had it.

The Winter of 1997 was one of the coldest Oklahoma City had had in many years. That January, I transferred for college and I almost didn’t make it. I felt like I had to summon the spirit of Sir Edmund Hillary to complete the expedition from my dormitory room to class. I couldn’t believe such cold was possible. I had an on-campus job with the grounds crew soon after arriving and they had us shoveling snow and doing general clean up. Sweat would run from under my stocking hat, past my ear muffs, turning my (then) long hair into brittle locks of frozen hair. It was then that my hate-hate relationship with the winter began. I wouldn’t feel that cold again until the morning of January 20, 2009 when I stood for hours on end at the Washington D.C. National Mall for the inauguration of President Obama.

I was not meant to be in cold climates, but here I am nonetheless. Living in Kansas City for the past twelve years I’ve made it through my fair share of snowmaggedons and subzero temperatures. I know this is nothing compared to Michigan, but I don’t care, it’s been pretty damned bad. For many years, we could tell how cold of a winter we would have by how mopey the change in seasons made me. I’ve never been diagnosed, but Emily is convinced I have seasonal affective disorder. I wouldn’t be surprised: the shorter days, the feeling that I should be hibernating rather than going on with work and routine as though we weren’t living in a godforsaken tundra…it gets to me.

Or, it used to get to me, I should say. Five or six years ago I decided I was done with this whole I-hate-winter business. It was pretty certain I was staying in Kansas City for the foreseeable future and I couldn’t just mope my way through the cold months. So I bought a new overcoat, the kind that is made from some magical material that is incredibly thermal while being impossibly thin. I bought a new pair of gloves and a hat, and I decided to put the notion of mind over matter to the test. I tackled each day with a winning attitude and my new winter accoutrements, and it worked. It really did!

It isn’t often that one can share a success story as successful as this, so I’m rather proud of this change. Whereas I once despised any season that was not the Spring, I now enjoy the fact that we have four distinct seasons. I suppose if I were pressed, I’d say the Fall is my favorite, but I’m not really sure. A couple of years ago we bought a house and for the first time in my life I found myself having to shovel my driveway and sidewalk. I thought for sure that would bring back old Scroogio. But it didn’t. Yes, it was hard work and I was sore for days, but I actually felt happy and accomplished after a good few snow-shoveling hours. So far this winter I’ve had to use the snow shovel for a total of about two minutes, and I feel robbed. Seriously, where is my bleak midwinter?

It’s good to have seasons. It’s good to be reminded that there is a time for everything. Winter is for stillness and dormancy, for thinking long and heavy thoughts. Winter is for hot soup and good books. But without any snow days in sight, how can we have any of that? They tell me not to worry, that snow is for sure coming. I hope they’re right. And that’s what I have to say about the winter, for the time being. 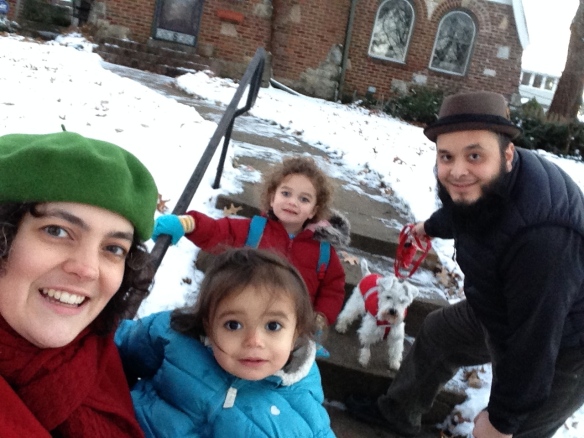 Out for a walk in the snow last year. Not this year, last year.

2 thoughts on “On Winter”