When a man says he is a feminist, chances are he will be perceived to be progressive, sensitive, and maybe just a touch provocative. When a woman says she’s a feminist, chances are she’ll be perceived to be confused, disgruntled and maybe just a bit of a man-hater. This has at least been my experience and it is one of many reasons why I believe we need feminism today as much as ever.

It is easy for me to say I am a feminist; I enjoy male privilege. I am painfully aware of that. So it is with trepidation that I identify as a feminist. My definition of a feminist is very simple, and because Gloria Steinem has put it in such a simple and elegant way, I use her definition, “A feminist is anyone who recognizes the equality and full humanity of women and men.”

Thanks to the work and sacrifice of so many feminists through time, we live in a world that is a little bit better, a little bit fairer. But the truth is we still have a very long way to go. We still need feminism. I realize this when I notice that the qualities that cause a man to be seen as confident, authoritative and strong are the same qualities that cause a woman to be seen as full of herself, bossy and dictatorial. I realize it when I’m told I should keep trying for a boy, even though I can’t imagine a boy could make me any happier, prouder or more grateful than my two amazing girls. I realize we need feminism when I’m asked whether my partner is a stay-at-home mom or a working mom (as though there’s such a thing as a non-working mom). I realize we need feminism when our nation, the beacon of freedom and democracy, has had forty-three presidents and not one of them has been a woman. I realize it when a friend asks on Facebook whether her friends identify as feminists and every other answer is something along the lines of, “well, the original meaning of feminism but not the man-hating it has turned into.”

Man-hating is a real thing and there is a word for it. The word is misandry, not feminism. Feminism has nothing to do with hating men. Feminism is good for women and for men. And yes, it is absolutely reasonable to wish for the destruction of the patriarchy while respecting and embracing the importance and equality of men in our societies. Why? Because working toward the abolishment of the patriarchy is not misandry, it’s equality. The patriarchy is as outdated and oppressive as the monarchy. Down with both of them.

It is my dream that my children, or perhaps my grandchildren will one day live in a world that doesn’t need feminism. Until then, however, I will continue to be a feminist. And that’s what I have to say about feminism, for the time being. 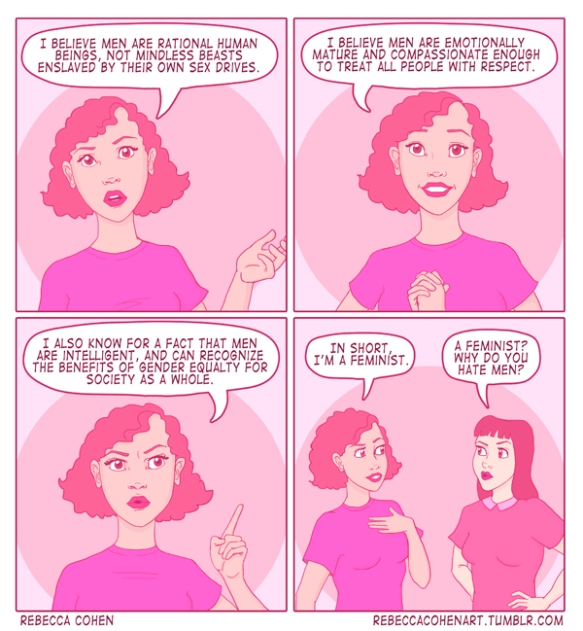