As a religious person and as one who has a deep respect and appreciation for world religions, I always enjoy the opportunity to learn something new not only about my tradition but about those of others. The religious path I follow makes my life richer and happier, and it helps me to understand myself and my place in the world. I am religious, without a doubt. But I don’t expect anyone else to be. In fact, I am of the conviction that while religion is absolutely wonderful, it is not absolutely necessary. Countless people lead meaningful, productive, happy lives without adhering to any particular religion or spiritual path.

Today, however, I want to reflect on the importance of religious literacy. In the United States of America, a nation that too many are only too eager to call a Christian nation, most people can’t name even one of the four Gospels. If we venture out of Christianity and start asking questions about Judaism, Islam, Buddhism, Hinduism or any of the other major world religions, the dearth of knowledge is beyond shocking. It is no surprise, then, that religion becomes such a sensitive topic, such a trigger for conflict and misunderstanding…it boils down to the fact that most of the time we don’t even know what we’re talking about. And what’s worse, we don’t care to know.

I contend that if we wish to be happy and responsible members of society today, it is important that we have at least a very basic understanding of religious traditions other than our own. Why? Well, for starters, the religious landscape has shifted and diversified drastically and will only continue to do so. This means that more often than not, we will find ourselves living, working, playing and collaborating with and among people of many different faiths. How can we relate to each other, how can we understand where we are coming from, how can we connect, if we don’t even know what gives meaning, purpose and context to the lives of those around us?

A basic knowledge of religious traditions is an invaluable asset even for people of no faith (to whom researchers have taken to labeling “nones”). Religious thought, language and aesthetics have permeated history, art, culture, literature and even science through the ages. Without a basic religious understanding, major works and human achievements lack context. This is true of Renaissance painters and Romantic period composers. But it is also true for popular culture. Even Star Wars, as I learned from Joseph Campbell, owes a great debt to religious archetypes and narratives of antiquity.

Of course I don’t think everyone should be a walking encyclopedia of world religions. But there are basic things we should know. We should know, for instance, how it is that the Abrahamic faiths (Judaism, Christianity, Islam) are related to each other. We should know that Paganism and the many earth-based religions classified under that umbrella have nothing to do with Satanism. We should know that it is possible to have religious conversations with people of other faiths without feeling compelled to debate with or convert them. And for goodness sake, we should know that the jolly, fat statue we see at Chinese restaurants is not the Buddha. And that’s what I think about religious literacy, for the time being. 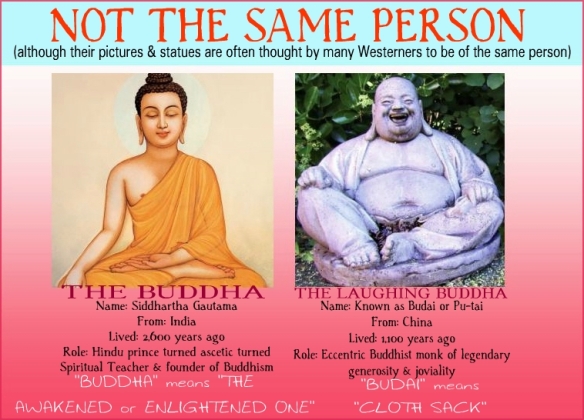